After introducing mezzotints and discontinuing the run of mono prints, the display of works in exhibitions have become less of a struggle. Combining such a great variety of different techniques was getting complicated, and although the mono prints, with their abstract touch and wide color range worked very well on their own as individual pieces, they failed to merge with the flow of the sensation I was trying to accomplish with the exhibitions.

Mezzotints are usually printed as a monochrome singe plate deal. The range of tones very much makes up for the lack of multi layer effects. As the observant reader might have picked up on, I like my works to have a certain amount of distortion and imperfections. I had to find a way to add some fuss and atmospherical mood, and an additional plate using white ink proved to be a very good way to get the final touch. This second plate is very much a random event, giving the prints a great variation in mood and tone; some rather clean, others very rough. Alas it’s rather complicated to set up an on-line shop for the editions, given the fact that the prints are not identical and each individual print must be liste individually. 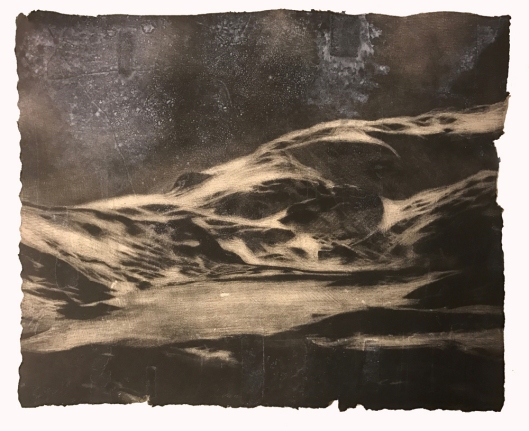 A solo exhibition will open at Bryne Kunstforening on February 18th. Life has been very hectic in the studio, working on several large canvases of which two were prototypes.

I went for a carefully selected range of motifs, some mainly focused on the snow and shadows, others more intricate with many layers. I would like to present a few of the new pieces here. Please read on!

The piece titled “Olalia” stands out as the most complex, and must admit it almost drove me of the cliff at some point. The vild moorland with specks of snow is indeed very hard to simplify and brake down into small color patches. It means small patches, and a lot of them! I also continued my little experiment from recent works, featuring some small birches in the foreground. 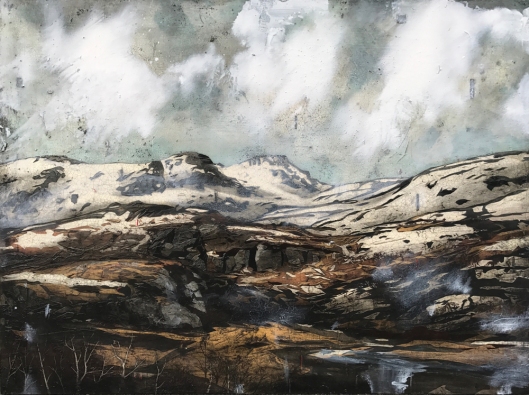 A large version of “Vaulo” was way overdue, and I was curious to see how the massive rocks would turn out. After a few rounds adding shapes using masking tape and some grey, dark and green shapes, the texture was still too smooth seemingly without any language. saying “Look at me, I’m made of rock”.  I had to go more organic, and applied some paint using a palett knife and a beaten up old paintbrush (the kind that is way overdue for the waste bin). This kicked the painting back on track, having created a texture that allowed me to stain and sand down, bringing out a structure that emulates the rocks of this place really well. The big green patch in the front was also in need of different tones in order to function.

Bjergane is a part of Midtre Etnefjell with a quintessential Norwegian west coast rock formation. I just love the way the edge curves and slopes, casting it’s shadows towards Mjåvatnet (a lake) gently nested just below the foreground (hence not featured in this painting). This is not your typical landscape painting, with dramatic peaks and graceful trees in the foreground. I wish to promote the beauty of a more subtle dynamic in nature. A landscape shaped by the enormous forces of the glaciers that would slowly grind down the rocks through eons of time … 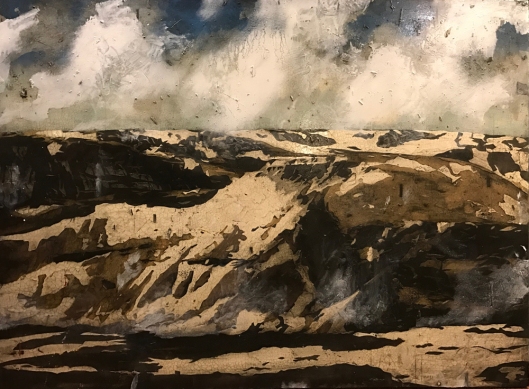